A Brief History of the St. Louis Ski Club

The St. Louis Ski Club began in the winter of 1958 when a group of 32 people with a mutual interest in snow skiing banded together for the first trip to Aspen via train and bus. Those were the days of leather boots, cable bindings and wooden skis; before condos with fireplaces and hot tubs; before gondolas; even before Vail!

The success of this first trip marked the start of the St. Louis Ski Club, which grew and prospered along with popular ski areas and a general interest in skiing. From the

The club’s purpose, as stated in the St. Louis Ski Club bylaws, is to promote interest and participation in the sport of snow skiing, and especially, the increased safety in this sport. In the late ‘60’s and early ‘70’s, when membership had grown to more than 1,000, the club began filling entire aircraft for trips to its favorite areas 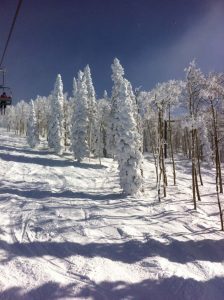 – Vail and Aspen. At this time, the club also added foreign trips.

Each year the schedule was highlighted by a trip to Innsbruck, Banff, Zermatt or another renowned ski area. In the late ‘70’s and early ‘80’s, the club began a year-round program of non-skiing activities such as ice skating, volleyball, tennis, golf, canoeing, parties, and always, lots of fun.

In the mid-‘80’s, the opening of a local ski area offered the club an opportunity to sponsor club races and racing continues to be part of most club trips. In the ‘90’s, membership stood at approximately 600 members. Some of the our members have taken up snowboarding in addition to skiing. The club added bike riding and rollerblading to its list of off-season activities.